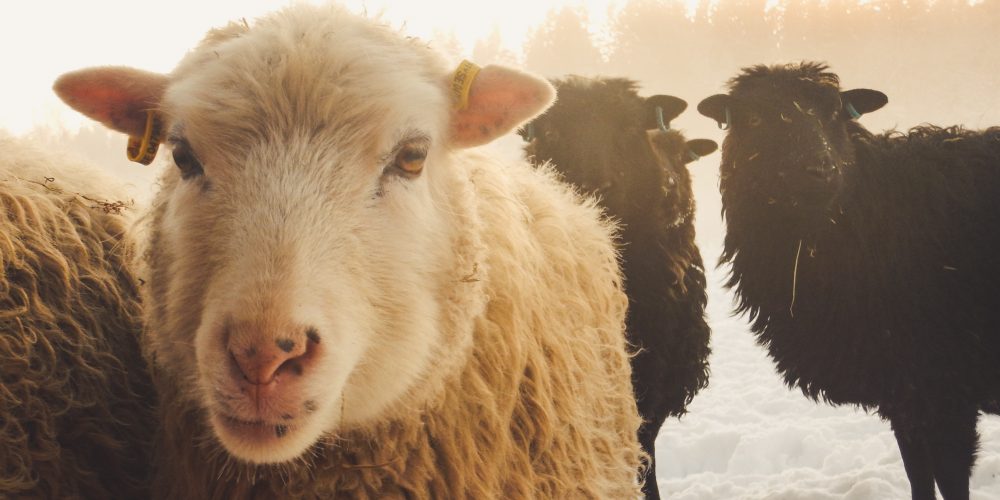 The Black Sheep of the Family

Until the day I moved out of my parents’ house, there had never been a time in my life that we didn’t have at least one family pet. We’ve always had dogs, and over the years we’ve welcomed a variety of other species through our front door, from rabbits to horses, and even a goldfish named Boris.

Being fortunate enough to be surrounded by pets throughout my childhood meant that I grew up referring to my family as a clan of devoted animal lovers. Animals were a way of life; we meticulously planned our family holidays around them, and for years my weekends were dedicated to cleaning stables, come rain, wind or shine. However, despite the way our lives seemed to revolve around our furry companions, there were some animals that were treated a bit differently to those we kept as pets. It was a divide that, up until the age of twenty one, I had always accepted as normal.

We love animals, but sometimes we eat them too.

For so long, eating animals was easy. They never looked like the animals they once were when we bought them pre-packaged at the supermarket, or when we sat down at the table for a Sunday roast. It was (and for many, it still is) a very simple procedure; to temporarily rewire the brain to look at the meat on your plate as something entirely different to the living being it once was.

For me, going vegan was making the conscious decision to stop rewiring my brain to think this way. It was choosing to acknowledge the animal products I was consuming for what they were, and more importantly where, and who, they came from.

I remember telling my mum when I made the decision to start the new year as a fully-fledged vegan.

‘Oh wow, the weight will fall off you!’ she had said. While I was excited about the potential weight loss that would result from cutting out meat and dairy, her reaction to my decision illustrated to me what her first impression of veganism really was: a diet. And although the health benefits of veganism were certainly appealing to me, they were not the main reason I decided to make the change. I decided to go vegan because I love animals, and to me, you cannot love animals and eat them too.

My family adore the animals they care for. They provide a wonderful level of care to all of our pets, and would actively go out of their way to stop an animal from being harmed if it was about to happen in front of them. But that’s just the point, isn’t it?

It is easy to eat meat when you don’t have to watch how it’s made.

My dad has said to me before that he is reluctant to watch one of the many documentaries about the truth behind the animal industry, because he knows that what he would see would devastate him. My mum provides a wonderful life for her chickens, so she doesn’t like to acknowledge that not all chickens are as lucky. It is the luxury of being able to choose to ignore the uncomfortable truth about the things we consume that keeps my family from giving up animal products, despite the fact that their moral compasses do truly align with the fundamental principles of veganism.

Recently, my presence at the dinner table as a vegan often serves to question their decision to consume animal products. If I can do without, why can’t they? When this particular conversation arises, and it has more than once, the atmosphere can quickly become uncomfortable.

I do my best to ensure that I do not preach incessantly, or intentionally offend my loved ones. I don’t whip out my phone at the dinner table to show my family slaughterhouse exposés right before they tuck into their roast chicken, or recite facts about what is really inside the cow’s milk they drink. For the most part, I speak only positively about the way I live, because it’s entirely possible to promote veganism without dredging up the morbidity of the diet I left behind. So if my choice to be vegan can still make my family uncomfortable, is it really about me?

The truth is that it isn’t about me at all. Before I went vegan, I would feel the same discomfort if I was prompted to reflect on my decision to consume animal products. Doing so would mean having to accept responsibility for supporting an industry that goes against everything a compassionate person, or an animal lover, should believe in. And as someone who has always considered themselves a compassionate person and an animal lover, it is unpleasant to have to face that truth. It is the same uncomfortable truth that my family have to face whenever we discuss veganism.

If you’re currently the only vegan in your family, it’s important to have patience. Giving up a way of life that you’ve known for years is not always an easy feat, so taking baby steps is often an effective way to make a permanent change. Perhaps offer a non-dairy milk the next time you make your dad a cup of tea, or try making a spaghetti Bolognese with soya mince to give your mum a night off cooking. At the very least, they’ll appreciate the gesture, and in a best-case scenario you can open their eyes to how easy and enjoyable it is to adopt the cruelty-free lifestyle you’ve grown to love.