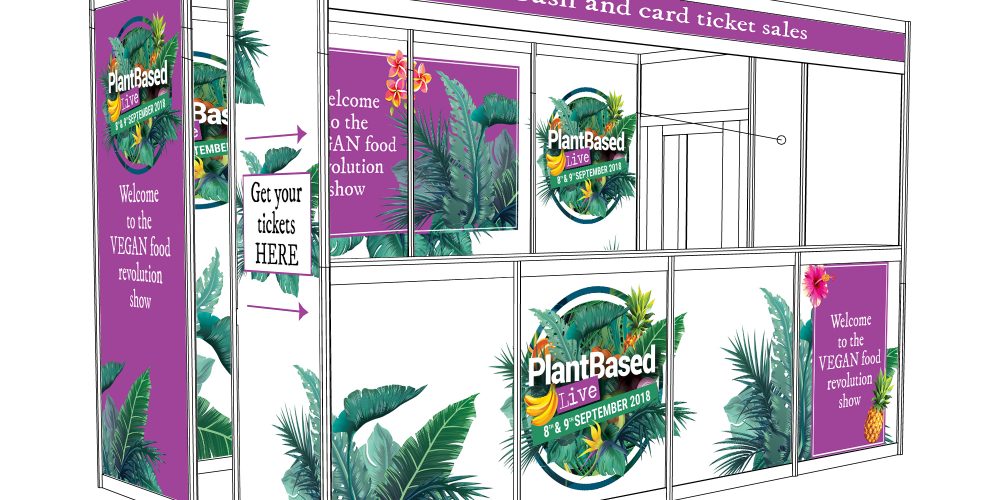 PlantBased Live was a two-day vegan exhibition held in ExCeL, London, in September 2018. The show brought together some of the UK’s leading experts in the plant-based food industry, as well as celebrity guests and over 100 plant-based stalls. With an expected footfall of over 15,000 people across the two days, PlantBased Live needed branding that really packed a punch.

The PlantBased Live team were unsure of what direction they wanted to take the branding of the show in, but were well versed in their demographic. With the majority of the expected attendees between the ages of 26 and 35 (38%), female (76%) and vegan (51%), I was able to quickly narrow down the audience this branding needed to target. I also had to consider exactly what this branding would be used for; it was not simply about creating a logo to post on social media, but rather a fully-realised, multi-purpose identity. The branding would be used across the internet, on t-shirts, train station posters, carrier bags, and ticket desks – it needed to carry the same impact no matter where it was.

With so many people falling for the misconception that a plant-based diet is restrictive and bland, I wanted to use PlantBased Live’s branding to prove otherwise. I was determined to make use of saturated colours, dynamic shapes and a youthful, vibrant typeface choice for the logo. Due to the various materials that the branding would be featured on, I needed to ensure that it would be legible regardless of size or application.

I set to work, using Adobe Illustrator, on creating branding that would make PlantBased Live an immediately recognisable name. My initial concept, with a large emphasis on the ‘plant’ aspect of ‘plant-based’, would later be improved upon by incorporating more food; one of the biggest aspects of the show itself.

The chosen branding for PlantBased Live brought to life the excitement and variety that a plant-based diet is truly made of. The choice of shape: a perfect circle, with tropical plants and fresh fruit bursting out of its boundaries, emphasises the idea of using ingredients that grow, rather than those that are processed and artificial. The stark contrast between the green foliage and the citrus colours of the fruit and vegetables promotes the feeling of freshness and increased energy that often entices people towards a plant-based diet.

Whilst the main logo was used frequently across many mediums, I was also able to take single elements of the logo and use them individually where the situation called for something a little simplified. For example, there was another version of the logo which featured just the text and the bananas for printing at a small size, and adverts where the same leaves that are in the logo were used elsewhere on the page. Being able to use single elements of a larger, more complex design for smaller-scale materials was of paramount importance, and proved very successful with the chosen branding.